The euphoria over shooter Rathore's exploits gets drowned in the shame over doping. 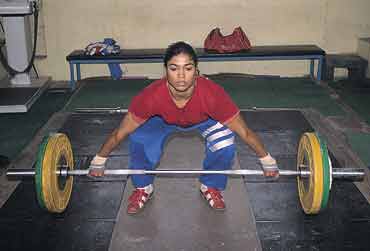 outlookindia.com
-0001-11-30T00:00:00+05:53
It was the double-barrelled shock India's sports supporters didn't want. Just when R.V.S. Rathore's silver in the double trap shooting event and Kunjarani Devi's brave performance in the women's 48 kg weight class had raised hopes, there was the news that Karnam Malleshwari failed to finish a single lift and Pratima Kumari didn't even show up for the women's 63-kg weightlifting event.

That was minor, though, compared to the news that Pratima Kumari had failed a dope test. Since the test had been conducted before the event, there was immediate speculation. Could the lifters have deliberately botched their lifts, citing back trouble? Plausible, either way, since weightlifters quite often suffer from back problems.

However, more shame was in store. On Thursday evening came the shocker that Sanamacha Chanu, the Indian lifter who had come in a creditable fourth in the 53 kg category, had tested positive for a banned diuretic. This time, the drug was discovered when Chanu failed a dope test after her performance.

As the sports bureaucracy retreated in confusion, the...