A Social Duet In The Sun

Netas, NGOs shed a taboo, enter into an uneasy synergy 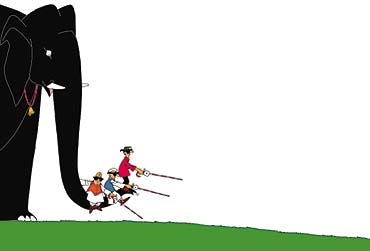 outlookindia.com
-0001-11-30T00:00:00+05:53
As NGOs from around the country gathered in early November to focus attention on the vulnerable and the marginalised—tribals, Dalits, minorities, workers, women—Delhi's Jawaharlal Nehru Stadium was transformed. Sliced between showings of alternate cinema at the tented "public ka multiplex" and cultural shows highlighting "the resonance of politics and art", workshops and interactive sessions changed the five-day carnival into a show of strength—though not overtly—of the CPI(M).

The party's leadership may have kept its distance from the Indian Social Forum, but most of its organisers are CPI(M) members. The ISF's aims too are those of the Left: "to further advance the movement against neo-liberal globalisation, sectarian politics, casteism, patriarchy and militarisation".

Collaboration between political parties and NGOs is a relatively new phenomenon. Initially, most political parties, whether of the left, right or the centre, were suspicious of NGOs—social movements that take funding. Across the globe, they emerged when the...