A Slice Of Sicily

Guns for hire outside, at home they're blatantly 'legit'—a herd of Capones in dusty Poorvanchal Updates 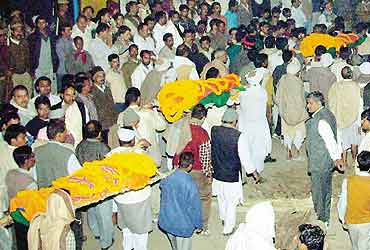 outlookindia.com
-0001-11-30T00:00:00+05:53
With the daring daylight killing of gang leader and Bharatiya Janata Party MLA Krishnanand Rai in Uttar Pradesh's Ghazipur district last month, the dons who strike terror in the badlands of eastern UP are making their Mumbai counterparts look almost low-key these days.

Armed with AK-47s, grenades and the latest state-of-the-art pistols, the bahubalis are steadily building up a reputation—and muscle—for being able to kill anybody, anywhere, for a price.

Outside UP, the trigger-happy and ruthless bahubalis are happy to work as sharpshooters and contract killers for the Mumbai underworld and others. But it is at home in Poorvanchal—a vast swathe of territory encompassing the seven divisions of Faizabad, Basti, Gorakhpur, Azamgarh, Varanasi, Mirzapur and Allahabad—that they really hold sway.

Gangs specialising in terror and extortion are fighting each other for control of the extortion market, the hugely lucrative coal business and government contracts. They have also made inroads into politics, entering the state assembly on party tickets and as...