Why is the Outlook for India so grey when, with the same indicators, Calcutta is so bright and shiny? Can't feelgood take a right turn instead of left? 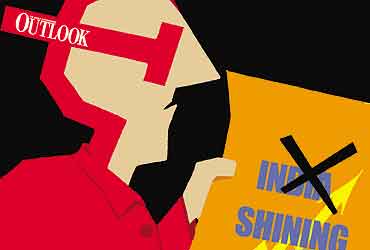 outlookindia.com
-0001-11-30T00:00:00+05:53
After reading the January 26, '04, issue of Outlook, one could be forgiven for wondering how something that's wrong for India as a whole could be wonderful in Left Front-ruled Calcutta (This is Cal, Katalysed). Especially as the magazine, while on the issue of India's economic performance, has been shedding copious tears for the 80 per cent who haven't benefited. Apparently, when Calcutta is in the arclights, this 80 per cent vanishes, the focus being the jetsetting 20 per cent. If nothing but to redress the balance and set right a few biases, let's consider the following.

In the national scenario, all the feelgood indicators—forex reserves, sensex hitting the 6000-mark etc—"are middle-class benchmarks" for Outlook. "There is no room in it for the poor and dispossessed; the Muslim craftspeople displaced after the Gujarat riots, the tribals who lost their land to the Narmada dam, the fishing communities who disappear after each cyclone...." Very concerned for the poor, I...