A Lick Of Terror 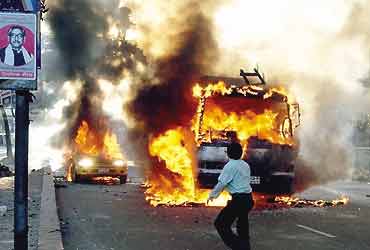 outlookindia.com
-0001-11-30T00:00:00+05:53
For Omar Khayyam, it was just another meeting of the Awami League (AW) party at its Bangabandhu Avenue headquarters in Dhaka. As former prime minister and AW leader Sheikh Hasina Wajed wrapped up her speech shouting, "Joy Bangla, Joy Bangabandhu," Omar and his pals began to walk away, firmly endorsing their leader’s demand for stringent government action against religious fundamentalists responsible for the bombings in recent months. Suddenly, all hell broke loose.

"My friends and I were four to five yards away from the truck Sheikh Hasina was addressing the rally from," Omar told Outlook. "Then I noticed something coming down like a falling star as it reflected against the sunlight, and a big bang. More came one after the other. I started to run along with the others." Omar remembers hearing people scream for help, interspersed with shouts of, "Is the leader safe?"

Back at the truck, other AW leaders quickly formed a human shield around Sheikh Hasina. She was whisked away to a waiting Mercedes Benz jeep as explosions continued to rock the venue. It was...