Our Special Forces, with their varied commands, have no focus 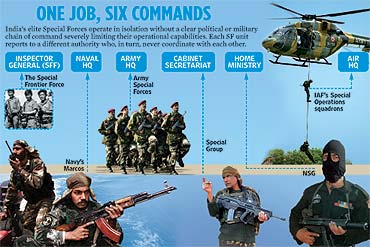 outlookindia.com
-0001-11-30T00:00:00+05:53
Among the various prescriptions thrown up after the Mumbai attacks was an option to strike at Pakistan's terror infrastructure by sending in India's elite Special Forces (SF). But were they in any position to conduct such a covert operation? Decades of neglect has meant India's SF is minus command or control and poorly equipped. A fact pointed out by Lt General (Retd) Hardev Singh Lidder, till last month chief of integrated defence staff (CIDS), and one of India's most respected generals in an anguished letter (accessed by Outlook) to the army chief in July '08.

As usual, his warnings and assessment were ignored by the army establishment. But as irony would have it, the point was driven home when the SF was needed the most. On 26/11 at 11.30 pm, two hours after the terrorists had struck in south Mumbai, the crisis management group met at the PM's residence to take stock. In the hours that followed, hundreds of phone calls were made as the Indian security establishment woke up to the enormity of the crisis.

One such call went...