The siege is from within. A way of life has been seized upon as a means to political power and a religion held hostage. 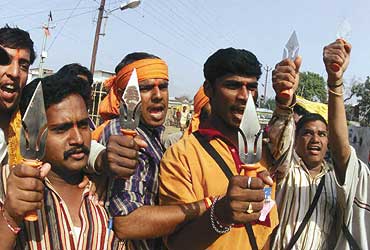 outlookindia.com
-0001-11-30T00:00:00+05:53
Hinduism is more a way of life than a form of thought. While it gives absolute liberty in the world of thought, it enjoins a strict code of practice. The theist and atheist, the sceptic and the agnostic may all be Hindus.... Hinduism insists on a moral life and draws into fellowship all who feel themselves bound to the claims which the moral law or dharma makes upon them.
—S. Radhakrishnan, The Hindu View Of Life, 1926

In the shrill din of the mob that extols the virtues of Hindutva in India today, Sarvepalli Radhakrishnan’s prescription for a Hindu way of life finds no takers. Remind the demagogues that syncretism is a natural, ancient impulse in Hinduism and they will scoff at you. They’ll also possibly ask you to look up a ‘defining’ 77-page pamphlet called We or Our Nationhood Defined, written in 1939 by Madhav Sadashiv Golwalkar, who once headed the RSS, the 77-year-old ideological fountainhead of the Hindutva upsurge. "The non-Hindu people in Hindustan," wrote Golwalkar, "must cease to be foreigners, or may stay in the country,...