A Date With Mr TBA 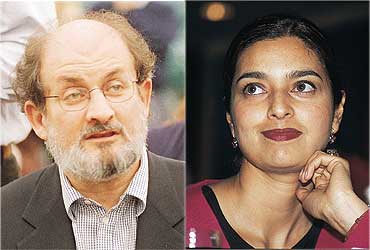 outlookindia.com
-0001-11-30T00:00:00+05:53
Last year, when the venerable New Yorker magazine turned 75, it threw a unique birthday party—a three-day literary weekend honouring its many writers and devoted readers. In over 50 Manhattan venues, its contributors, critics and cartoonists read fiction, gave erudite talks, and debated on panels. The New Yorker Festival was such a success that it returned this year to a sold-out encore.

The magazine's Pulitzer-winning discovery, Jhumpa Lahiri, was slated to read at one of Friday's Fiction Night events (on May 18) with another writer—"To Be Announced". Last year's tba, a closely-guarded secret, was paired with hot, twentysomething British novelist Zadie Smith of the bestselling White Teeth fame. The mystery guest turned out to be Salman Rushdie, emerging happily from hiding. This year, however, The New Yorker's initial coy notice was soon overtaken by a programme boldly listing Rushdie as the second reader.

The audience of approximately 600 was welcomed by Bill Buford, The New Yorker's fiction editor who, as former editor of Britain's offbeat literary magazine...