Sham Lal's India is at the end of its tethers. His pungent humour hides frustrated hopes. 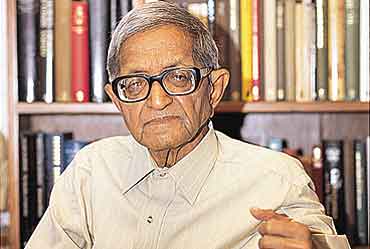 outlookindia.com
-0001-11-30T00:00:00+05:53
Sham Lal is a philosopher-journalist. He has spent a lifetime trying to read meaning into events in a bid to understand India. His insightful newspaper columns over many decades, Indian Realities is, as he himself admits, "in bits and pieces". In dissecting others' views, he offers his own.

Even if it is necessarily fragmented, the collection presents a live commentary on the shaping of India, a kaleidoscope of reflections on events, ideas and trends. Sham Lal is an observer, not an ideologue, a critic who mocks the certitudes of others, asks awkward questions and poses answers in order to provoke introspection, dialogue and debate. He does not tilt at windmills but sets about demolishing humbug with pungent humour without suggesting that his own views constitute the ultimate wisdom.

Yet one discerns a trace of pessimism, certainly, scepticism in Sham Lal's writings over the years. He speaks of India's "frustrated hopes" and laments in 1991 that the country is fast becoming ungovernable, whether because of systemic or leadership factors, in a setting marked by...