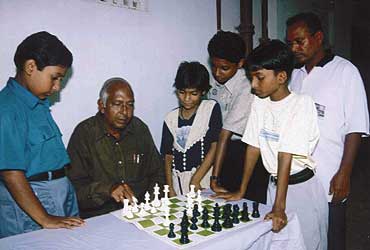 Purabi Das December 02, 2002 00:00 IST A coach plots the future of his students on the sixty-four squares

outlookindia.com
-0001-11-30T00:00:00+05:53
Adegree in English literature, a job as under-secretary in the state works department and a self-deprecating manner are unlikely attributes in a chess coach. Arati Bijoy Mohanty, who spent several years writing notes on files in a dingy room in the Orissa Heads of Department building, has a hidden passion. He loves and lives chess. But his passion was manifest as a grand teacher, not grandmaster.

Mohanty started his Free Chess Coaching Academy from his home way back in 1970. At the time, the nation had barely a handful of great players. Chess was considered a nerd’s game and the image of a chess player—the small, sickly looking types with large spectacles—put off a lot of youngsters.

Mohanty tries to instil the...