A Blanket For The Banished

Thousands die of the cold on Delhi's streets every winter. There may be a little warmth this time. 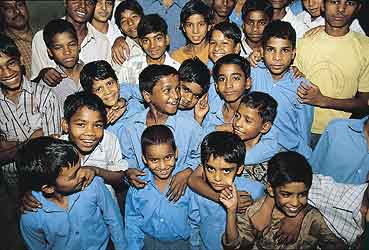 outlookindia.com
-0001-11-30T00:00:00+05:53
Delhi’s harsh winters take a heavy toll of its estimated 1.4 lakh street-dwellers. Beat constables found 3,040 unidentified corpses on the pavements last year, most of them victims of the cold. This estimate excludes those who sleep on carts, rickshaws and tarpaulin tents as they are not classified as ‘homeless’. With them, the disinherited would number around 8-10 lakh.

On the eve of winter 2003, which the met department has said would be unusually severe, eight ngos and religious institutions have banded together to provide shelter to 20,000 homeless. The ngo network’s primary focus is shelterless women, children, handicapped and aged, the most vulnerable to the vagaries of weather.

Curiously, at a time when the number of homeless people is growing, the government is actually closing down its night shelters, or raen baseras. The rationale: the homeless do not avail of them. Last year, against a capacity of 2,454, occupancy was only 800 to 900. The ngos found that conditions in these shelters were so poor the occupants felt safer on the streets.