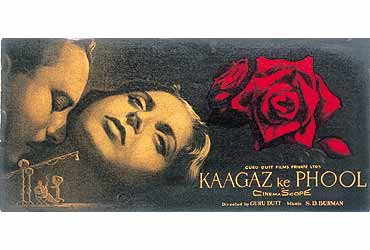 Kaagaz Ke Phool was the film where Guru Dutt foresaw his own death. This brooding study of the declining fortunes and doomed love of an ageing filmmaker could have easily played out as a sentimental soap opera. Instead, Dutt’s intensely personal cinematic sensibility, the vivid imagery of cameraman V.K. Murthy and the haunting lyrics of Kaifi Azmi make Kaagaz... a beautifully understated tragedy. Much of Kaagaz... mirrors Dutt’s own life, his unhappy marriage with Geeta Dutt and his undefined...