The torched train was all the spark Gujarat needed to get inflamed. And the state and police seem in no hurry to curb passions.
Free Speech: Riot After Riot 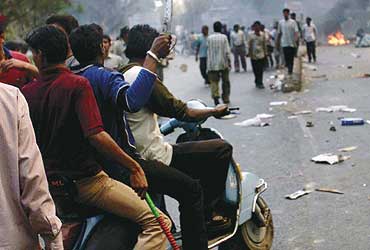 outlookindia.com
-0001-11-30T00:00:00+05:53
On Wednesday, February 27, groggy passengers were waking up to a warm sunny morning as the Ahmedabad-bound Sabarmati Express pulled into the Godhra railway station off Baroda at 7.20 am. Slogans of Jai Shri Ram rent the air as the train coming in from Faizabad in Uttar Pradesh and carrying a fair sprinkling of kar sevaks came to a halt. With thoughts of getting home uppermost in their minds, weary passengers alighted for tea and bhajia. Nothing seemed out of the ordinary—the scene was a usual one witnessed at any railway station. Even a confrontation between two vendors and some passengers over a petty matter seemed routine and no one spared it a thought as the train left Godhra after a brief halt.

It must have proceeded barely a kilometre when it stopped in its tracks—someone had pulled the emergency chain. Everyone was irritated at the prospect of a further delay to a train already running behind schedule. But nobody at that point had any inkling of what was to come. Suddenly, a fusillade of stones smashed into the window panes of the second-class sleeper coach...