This refers to your cover story Ram Retold (August 17). The immortal saga of Ram has been told and retold many times—not only in India, but also in other countries, especially in Southeast Asia. Amish Tripathi’s view that Indians never get tired of or bored with stories of their deities is authenticated by the tremendous popularity of and devotion for Ram, as can be seen in Ramleelas every year. Devdutt Pattanaik had interesting insights about characters from mythology and the difference between fiction and myths. Also, I agree with reader Sumit Mishra’s letter (August 17) about your cover stories dominating the magazine and the need for more variety. He has rightly said that your readers come from various backgrounds and none want to become experts. We want a variety of stories.

Our epics, folklore and culture provide us with a rich storehouse of stories waiting to be told and retold, with some tweaks here and there. Our mythological figures packed in appealing covers and sleek pages or popping from mobile screens in digital avatars hold us in their thrall. The credit for that also goes to the painstaking research work of novelists, their insightful interpretations, their flights of fancy and their contemporary prose. As for Ram, he has ridden the chariot of Hindu­tva ascendancy to occ­upy our zeitgeist. As religion takes on a political colour, the messiahs resurrect in all their triumphal glory to regale us.

Yes, the new generation will certainly be bowled by this new mythological tale where the giant guardian is carrying away his kid, Ramlalla, to his long-lost magnificent palace, as depicted in posters all over Ayodhya.

The story of Ram remains popular because it is realistic and practical. We Hindus worship many things either for their usefulness or in recognition of their destructive power. We pray to the earth, moon, stars, rivers, food, trees, serpents and of course, stones. Ram is more than a mere god. He had many constructive and destructive capabilities as well as expertise regarding how and when to exercise them. The power that is not used and demonstrated loses its sheen. Just as Ram could destroy his enemies, he also had love and affection for his people. No one could cheat and betray him; his identification of his friends and foes was foolproof. In our era, the attributes of our prime minister are very much akin to that of Ram.

This refers to Desert Storm (August 3). Sachin Pilot has quelled his rebellion and the Rajasthan government remains safe. But for how long is anybody’s guess. The party has been in turmoil since it lost its votebanks. It hasn’t been able to play the numbers game and hold on to its flock in Goa, Karnataka and Madhya Pradesh. The scene was set for a setback in Rajasthan, but they managed to trump it. Congress’s infighting is responsible for its debacle—no other party can be blamed for its losses. The party is without a full-time president and the vice-president is not authoritative enough to hold the fort. If Rahul Gandhi continues to act unreasonably, the outcome of the 2024 parliamentary elections will be no different. While instability continues to plague the party, Gehlot cannot be written off—for now at least.

Hanging By A Thread

This refers to Hanging By A Thread (August 17). The Supreme Court correctly maintains that priesthood is open to all Hindus as long as they comply with agama shastras. Agama traditions are unique to our temples. With alternative opportunities available, people from other castes are not as enthusiastic about becoming priests. With all the affirmative action supporting them, I am surprised some of them aspire to become priests. For the Brahmin community, the traditional priestly class, being a priest is not monetarily viable, more so during the pandemic when temples are either closed or few devotees are visiting. With little or no income, it is their lives that hang by a thread. Many households have stopped inviting priests for weddings or other religious functions due to the fear of contagion. Except for some popular temples, the vast majority of shrines in India are impoverished. The priests there, whether Brahmins or from other castes, find it hard to eke out a living.

This refers to Ethnicity Leaking Red (August 17). The politics of parochialism and ethnicity eventually leads to violence and mayhem. It leaves the poorest at the receiving end, often rendering them jobless and homeless. The idea of India as a land for all its citizens must be upheld. In many states, such as Maharashtra, parties have sacrificed innocent lives or livelihoods for expedient political gains. Bengal has a history of people settling there from all over the world and living in harmony. It must not follow in the footsteps of Maharashtra. It is sad to see parties play the ‘son of the soil’ card. They should instead use their energy and enthu­siasm to fight China and Pakistan.

This refers to Cost Of Distrust (August 17). Amritsar and Lahore were big trading centres before Partition as well. The distance between the two cities is around 40 km, less than the distance a resident of Palwal covers when travelling to Connaught Place in Delhi. With widespread trust deficit and terrorism abetted by Pakistan, resumption of trade seems to be a distant cry. People who depended on this trade have been hard hit because alternate job and business opportunities these days are as scarce as water on the moon. Both countries are losing heavily on trade, cultural exchange and travel opportunities. Open borders and free trade would have changed the fortunes of Pakistan, just as it has been beneficial for India, Bhutan and Nepal. The trade deficit, however, can only be bridged once the trust deficit is taken care of.

The unilateral transfer of Sushant Singh Rajput’s case to the CBI raises questions about constitutional ethics. It proves the Orwellian axiom that all people are equal, but some are more equal than others. If the person who committed suicide were a Vidarba farmer or a suburban Mumbai street hawker, the case would have been closed in a matter of days and the file consigned to the record room. The case casts aspersions on the competence, integrity and impartiality of the Mumbai police. The CBI has few convictions to its credit. A majority of cases against powerful politicians, senior bureaucrats, business tycoons and others ended in acquittals at trial or appellate courts. India is a union of states and the Constitution has assigned certain subjects to their jurisdiction, such as law and order and police administration. The unilateral transfer of cases to the CBI is an assault on states’ autonomy. It is a cause of concern to all citizens who value democratic morality. 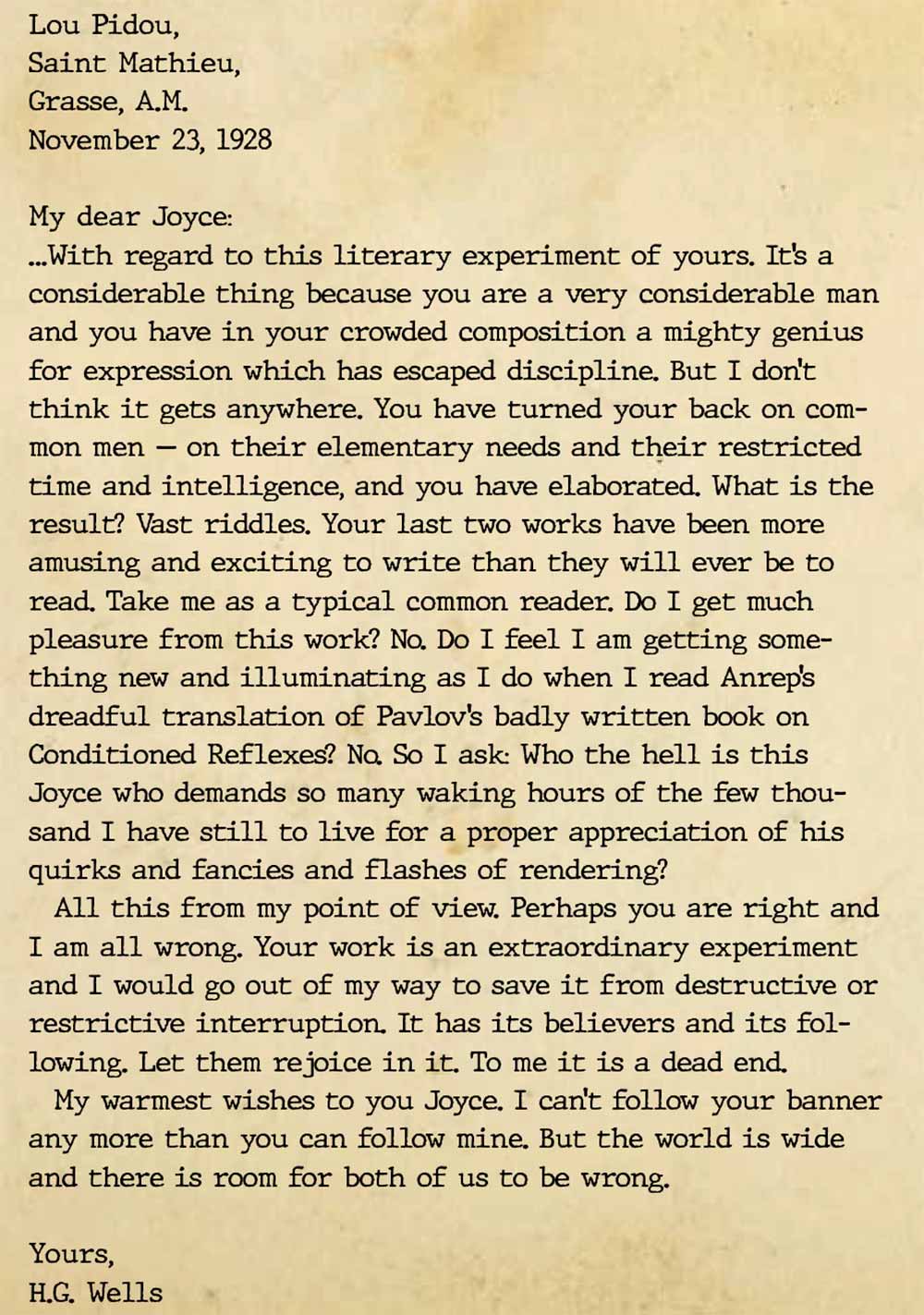 Dead End Excerpt of a letter from H.G. Wells to James Joyce regarding the latter’s last novel Finnegans Wake