From Ludo To Rummy, Online Gaming Comes To Roost During COVID Times, But What Is The Real Deal?

This refers to your cover story The New Contagion (August 10). Online gaming is rapidly catching the fancy of youngsters in India. For a generation hooked to cell phones, virtual games are the next exciting frontier. This is because games require action, skill and luck rather than passivity, which mobile users are often accused of. Besides, favourable outcomes give the young the joy of victory and bragging rights. As the legalities of such games are still fuzzy, it’s not an easy world to negotiate, especially for beginners. Regardless, the community continues to grow exponentially due to the contagious nature of online gaming. For those with the rare knack or plenty of luck, it may bring money, but for the rest, it is a pastime until the next big thing on their screens catches their attention. The enterprising, however, will seize this opportunity to laugh all their way to the bank.

Marred By Defections And Drift, Is Congress Taking Baby Steps To Revive Itself?

This refers to Unfinished Agenda (August 10). As a democracy, India needs an effective Opposition. Only the Congress can play this role at the national level. With its long history of playing an active role during the freedom struggle and nurturing India as a democracy, Congress still has the important responsibility of being an effective Opposition. Even though it won many of the recent state elections on its own or in coalition with other parties, it has been outmanoeuvred largely due to a leadership crisis. Defectors played a key role with their shifting loyalties. It is time for the Congress to give ample opportunities to younger leaders if it wants to regain its relevance. For now, Rahul Gandhi cannot walk away either as it will create a leadership vacuum. Eventually, the young, capable leaders in the party can take over the ‘Gandhi family mantle’.

Congress has been out of power for the last six years and will continue to be so till 2024. After the party’s worst-ever Lok Sabha tally of 44 seats in 2014, many leaders had openly blamed Rahul Gandhi and his team of advisers. However, the four-member panel headed by former defence minister A.K. Antony to identify the causes of the poll debacle absolved Sonia, Rahul and Manmohan Singh of any responsibility for the 2014 poll drubbing. Congress lost again in 2019, getting just 52 seats in Lok Sabha and Rahul Gandhi offered to resign as the chief of the party. He also declared that the new president would not be from the Gandhi family. After a lot of drama, Sonia Gandhi took over as the interim president —back to square one! The struggle between the party’s old and young guard continues. What Congress needs most now is a capable leader who can get rid of the dynastic albatross around its neck.

People’s perception is that apart from the occasional buzz around Rahul Gandhi and his few loyalists, Congress is a dormant party. Many people are not aware of the grassroots activities to rejuvenate the Congress due to a lack of media coverage. The revival of Congress is an absolute necessity for the survival of democracy—there must be at least two parties in any democracy. The BJP understands this, which is why it wants a ‘Congress-mukt Bharat’. Even though it is crumbling, Congress is the only other national party. All others are small fish for the BJP—as the big fish, it can swallow them in one gulp whenever it wishes. The Congress has to be ever vigilant about its flock. It must follow the principle of merit, irrespective of its members’ pedigree or age. It must present a cogent alternative for economic revival, the welfare of the poor, primary education and healthcare. Public funds should not be used for the construction of temples and statues. In today’s communally polluted atmosphere, the Congress must not get entangled in the trap of Hindutva as people want practical policies for their welfare.

The Congress is facing an acute existential crisis. Chief Ministers of the handful of Congress-ruled states are supposedly being given the leeway to decide matters for themselves by an ‘accommodative’ 10, Janpath. But then, is there any other way to save the government from toppling, as we are currently witnessing in Rajasthan? The fact of the matter is that circumstances are dictating this push towards decentralisation, if we may call it so. Agreed, the high command (the Gandhis) is still the glue holding the party together, but it does not wield the same clout as earlier. Electoral reverses continue to dog the party, barring the odd barely-there victory. What were once just murmurs of dissent are now taking an ominously vocal turn. Party workers are a completely dispirited lot. However, unless there is an overhaul at the top, nothing is going to change in and for the party. Remember, a fish always stinks from the head.

Kashmir 370 Degrees: Year To The Ground

Your cover story Kashmir 370 Degrees (August 10) attempts to decode the warp and weft of the tangled web of Kashmir. Indeed, history in general and the history of Kashmir in particular is not about one legislation or a chronology of events. To understand the tone, tenor and timbre of the Kashmir dialogue, we need to see its evolution through the longue durée approach of history. Looking at Kashmir from the perspective of August 5, 2019, alone may lead us to meaningless cliches. And it serves little purpose to continue repeating ad nauseam that Kashmir is an integral part of India when traces of conflict are writ large all over. One look at the bunkers and stone-pelting demonstrates the gap that somehow exists between Kashmir and the rest of India. Commentators on Facebook say that stone-pelting is an old, indigenous form of protest in the Valley. The stone appears to be a missive from Kashmir that announces the presence of Kashmiris—to India and the world. How the abrogation of Article 370 will impact the situation in Kashmir can truly be assessed not in a year, but in how things shape up in the longue durée.

The Cashmere Game: Why Britain And Russia Were Engaged In High-Stakes Tussle Over Kashmir

There is an error in Saikat Niyogi’s The Cashmere Game (August 3). Raja Gulab Singh, the ruler of Jammu, bought only the Kashmir Valley from the British in 1875. Ladakh and Gilgit-Baltistan were much later annexed by his son and successor, Raja Ranbir Singh, to create the unified Jammu and Kashmir princely state.

This refers to your story on the Bihar elections (Their Poll Positions, August 10). Bihar is suffering from the double whammy of floods and the pandemic, but instead of focusing on alleviating people’s miseries, the state’s leaders are more worried about their political future. Now that the Opposition and ruling coalition have given their suggestions to the Election Commission, they should bury their differences and bring much-needed succour to the beleaguered people of the state. After all, they will note how politicians responded to their distress and keep that in mind when casting their vote. 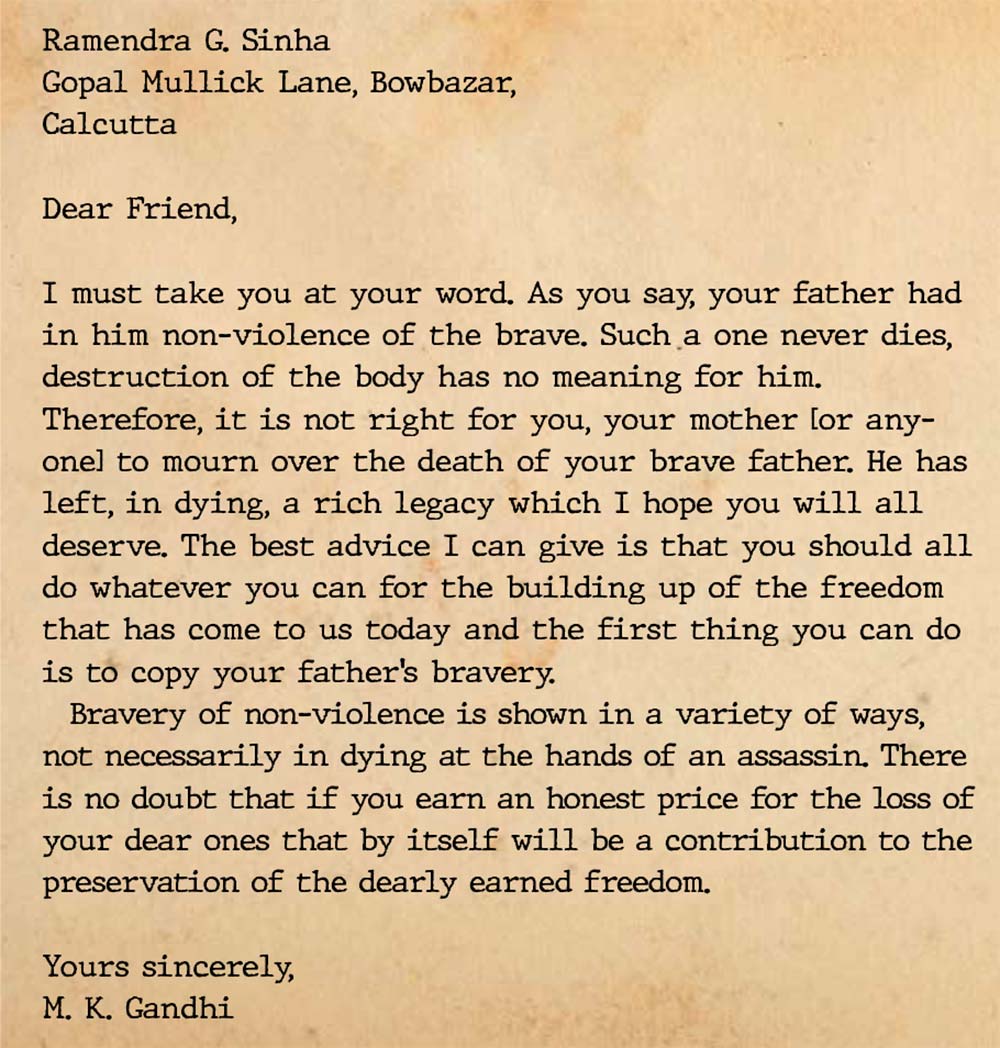 Rich Legacy Gandhi’s reply to Ramendra G. Sinha, who had written a letter about how his father died while tr ying to stop rioting. Gandhi penned this response on August 15, 1947. 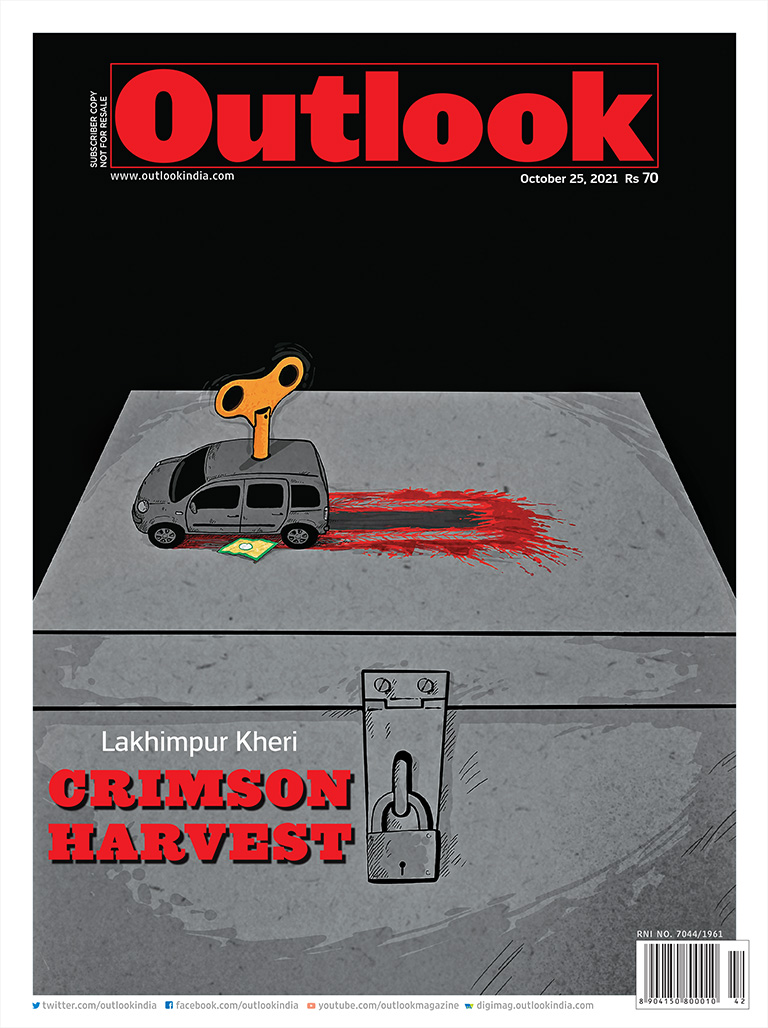