From Dacoits To Gangsters, How The Pathogen Of Crime Mutated In Uttar Pradesh

This refers to your cover story Gangs of Uttar Pradesh (July 27). With the Vikas Dubey saga hitting headlines, it was certainly a hot-button topic the Outlook team picked up. But by trying to give space to nearly all the ‘badmen’ of UP, your story lost the plot. The piece does not make any revelations; it just reiterates what is already out there. The all too familiar political-criminal nexus was paraded and no new insights were offered. The reader was lured by the cover, hoping for something as exciting as Gangs of Wasseypur to kick in, but what could have been an interesting, informative story eventually turned out to be a bland, tiring read.

While covering the encounter of Vikas Dubey, the mainstream Indian media—particularly Hindi newspapers—appears to have condoned the extra-judicial killing. They again failed to act as a defender of civil rights. Can an encounter by the police, in any condition, be justified in a democracy? Who will deny that the job of the police is to investigate and produce an accused before a court? In a landmark judgment in 2012, the Supreme Court warned against ‘encounters’: “It is not the duty of the police officers to kill the accused merely because he is a dreaded criminal. Undoubtedly, the police have to arrest the accused and put them up for trial. This court has repeatedly admonished trigger happy police personnel who liquidate criminals and project the incident as an encounter. Such killings must be deprecated. They are not recognised as legal by our criminal justice administration system. They amount to State-sponsored terrorism.”

The politico-goon nexus is prevalent across the country. Had Vikas Dubey not crossed the line, he could have been an MLA. Each party has dubious characters—none can claim to have removed criminals from their ranks. The way he was killed raises lots of questions. When he was ‘peacefully’ captured and taken under heavy escort to Kanpur, how come the police allowed such a dreaded criminal to be ferried without handcuffs? His encounter has spawned a thousand conspiracy stories because he was expected to sing the names of his benefactors. Courts did not take suo motu cognisance of the case. When we allowed Kasab a trial, how can we glorify this ‘street justice’? Everyone deserves a fair trial regardless of their crime.

Former director general of UP police, Vikram Singh, explains the rise and hold of organised crime in the state well. His most remarkable comment is that “such people were enabled by an eager group of corrupt politicians, an aloof judicial system and complicit police. It’s a huge banyan tree of complicity.” That tree continues to flourish. Few people bother about the politician-police-criminal nexus unless there is an exigency. The general feeling is that had Dubey not killed policemen, his extra-judicial killing would not have occurred. The criminalisation of politics is a matter of grave concern for citizens, but our lawmakers are not interested in making and implementing laws effectively to curb the menace because it clashes with their interests.

I would also like to bring to your attention that for the first time, a letter has been published without the name of the author in the Gangs Of Uttar Pradesh issue (July 27, Volume II).

The UP Police scripted a terrific story around Vikas Dubey’s extra-judicial killing. They should definitely win this year’s Nobel Prize for literature!

Stage-managed extra-judicial killings have been labelled as ‘encounter killings’ to confuse and mislead. That, however, doesn’t hide the fact that the State is brazenly indulging in criminal activities in gross violation of Constitutional provisions and the rule of law. The powerful are protecting and promoting goons to crush their opponents and critics. When such pets go out of control, they become a potent threat to their patrons and are eliminated by executing a pre-planned ‘encounter killing’ lest they open their mouths and expose their misdeeds. These State actors conveniently bypass the lawful methods of collecting evidence, framing chargesheets, prosecuting the accused in a court of law and getting them convicted and duly punished. They then solicit applause from the public for supposedly establishing the rule of law and dealing with alleged criminals quickly. If we do not reform this barbaric system, our beloved democracy will come undone soon.

Vikas Dubey picked up crime to enhance his political prestige. A notorious law-breaker, Dubey was charged with the killing of eight policemen. He also faced charges of dacoity, assault and intimidation. It is all a sordid tale of how a ‘Panditji’ killed a bunch of policemen and members of his own tribe. The justice system in India is perhaps too complex for judges to expeditiously deal with tricky political cases like Dubey’s. But public sentiment is overwhelmingly in favour of the police encounter. And Vikas Dubey’s wife asserts that he “deserved his fate”.

Bollywood has always been fascinated by the life of dons ruling the underworld (Loins Of Bollywood, July 27). The ruthlessness, wealth and connections of dons make them larger-than-life figures, fit enough to be dramatised on celluloid. Movies on the lives of notorious criminals have been quite interesting. Interestingly, some of the people working in the industry too have had brushes with the world of crime. The rendezvous between glamour and crime is not a secret. Undoubtedly, movies and crime tend to feed off each other. After all, the merging of ‘reel’ and ‘real’ action makes for exciting fare, doesn’t it? 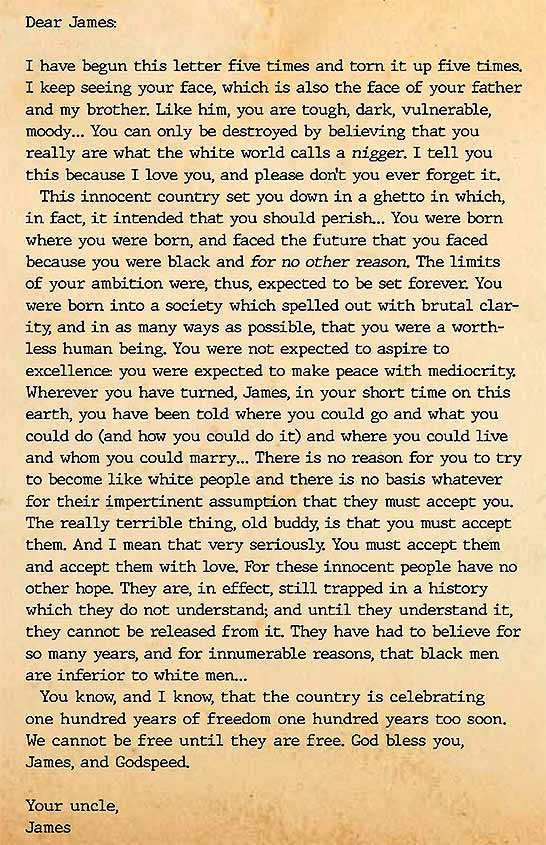 For No Other Reason Letter from author James Baldwin to his nephew in 1963, 100 years after Lincoln’s Emancipation Proclamation