This refers to your cover story How’s The Office Josh? (July 27). There is no doubt that the ongoing pandemic has affected the way we live. There are businesses where human presence is not required and one can work online, but there are many industries where close interaction is vital. Even in a developed country like the US, only 33 per cent of the population can work online from their homes. Although the work-from-home culture is taking shape in India—videoconferencing has replaced meetings and seminars—it has a long way to go. Many services in the travel and hospitality industries will continue to be human-centric. Besides, some businesses might continue to insist on human presence so that they can closely monitor their workers.

With the pandemic showing no signs of a letdown, professional and personal lives continue to coalesce and work from home remains the buzzword. As expected, the office set-up is changing to adapt to the crisis. The resumption of offices has received a mixed response. Those who have adapted to the WFH comfort zone aren’t eager to return to commuting. However, those who missed the opportunities to socialise in office and the change of scene it provides, the return to the office is exciting. However, the lockdown continues to wreak havoc on businesses and employees continue to receive pink slips. The possibility of recurring waves of infection further compounds problems. In this grim scenario, it is obvious that the ‘office josh’ cannot be high.

Those who are still employed are scared about job losses, salary cuts and huge declines in corporate earnings. However, some are buoyant about returning to the office and resuming their pre-pandemic lives. Work from home is likely to become a more important part of offices. It is interesting that 73 per cent of survey respondents believed that WFH would result in fewer cases of sexual harassment in workplaces, while 64 per cent believed that it would reduce extra-marital affairs. In any case, one thing is certain—the world will never be the same again, either in offices or outside.

After Galwan Face-off, Why Future Looks Tense For Sparring Neighbours India And China

This refers to the cover story Dragon At The Door (June 29). China is worried about India’s ban on its apps. India is a huge market for Chinese apps, mobile phones and electronic goods, so China fears the geopolitical consequences of this ban. It may present an alternative for other countries that seek to curtail the pervasiveness of Chinese apps, while safeguarding citizens’ data. The USA and Australia are looking into banning certain Chinese apps. In Australia, the fear is that, as recent headlines allege, Beijing-based company ByteDance is feeding users’ data to the Chinese Communist Party. Consumer groups and security experts have identified AI-enabled smart toys that raise privacy and security concerns because they have spying capabilities. A German telecommunication watchdog banned select electronic toys due to this fear. India is a big importer of electronic toys and gadgets from China and needs to ensure their safety vis-a-vis surveillance. Over the years, China has long defended the use of its “great firewall” to block foreign websites and apps. By banning Chinese apps, other countries are giving China a taste of its own medicine.

Modi’s all-party address was defensive and cliched. If not an inch of territory was ceded, then how come 20 soldiers were martyred? Why, then, are talks going on with the Chinese government? The government tried to sideline the issue. Though the questions the Congress posed are relevant, it also lacks credibility. Nehru made several mistakes. He let China take over large tracts of land. When China annexed Tibet, India tamely recognised it. These were huge blunders.

How A Delhi Engineer Dug Out Dara Shikoh's Grave, The Brother Aurangzeb Beheaded!

Skeletons In The Mughal Closet (July 13) was a fascinating read and a welcome ‘corona break’, to add yet another word to your COVID-19-inspired lexicon. Though Aurangzeb defeated and beheaded his brother, Dara Shikoh, the latter continues to live on in our minds. There are many ‘ifs’ that surround Dara, the most important being, ‘What if Dara had graced the Peacock Throne?’ This is an engrossing question, but more fascinating is the fact that a nondescript SDMC engineer has been able to hunt down Dara’s tomb, a matter of intense speculation for centuries. Singh’s patience, passion and perspicaciousness are ample proof that if one wills, ways are not wanting. Even as historians mull over Singh’s findings, it is impressive that a system as ossified as the bureaucracy couldn’t deter him from achieving his goals. We earnestly hope that now that we have found his tomb, we somehow also get a whiff of the tolerant, pluralistic aroma that Dara stood for.

Bihar Is In A Mess And We’ll Change It: Yashwant Sinha

This refers to Yashwant Sinha’s interview (Bihar Is In A Mess And We’ll Change It, July 13). At the fag end of his career, Sinha is thinking of changing Bihar. Why did he not do that in the years when he was in power? Before the elections, everybody promises change, but after is another story altogether. As for his call for change, there is unlikely to be much of a transformation in the political scene as the Modi wave continues to sweep the country.

How Probe Against Robert Vadra Keeps The Pressure On Congress

This refers to your story In Search Of Vadra’s Crimes (July 27). It has been more than six years since the BJP government came to power, but they could do nothing to nail him. Cases have been filed and highlighted, but there is no action on the ground. No one wants to finish making the dish—they would rather keep the pot on a slow burner. BJP’s strategy is to stoke fear and malign his name. It cannot arrest Vadra on weak grounds as it may not pass the scrutiny of courts. Vadra’s ascent to riches is fishy for sure. But investigating agencies don’t have clinching evidence and putting him on trial may prove to be counter-productive. Once he is on trial, the fear factor will vanish. So, everybody continues to play the cat-and-mouse game. 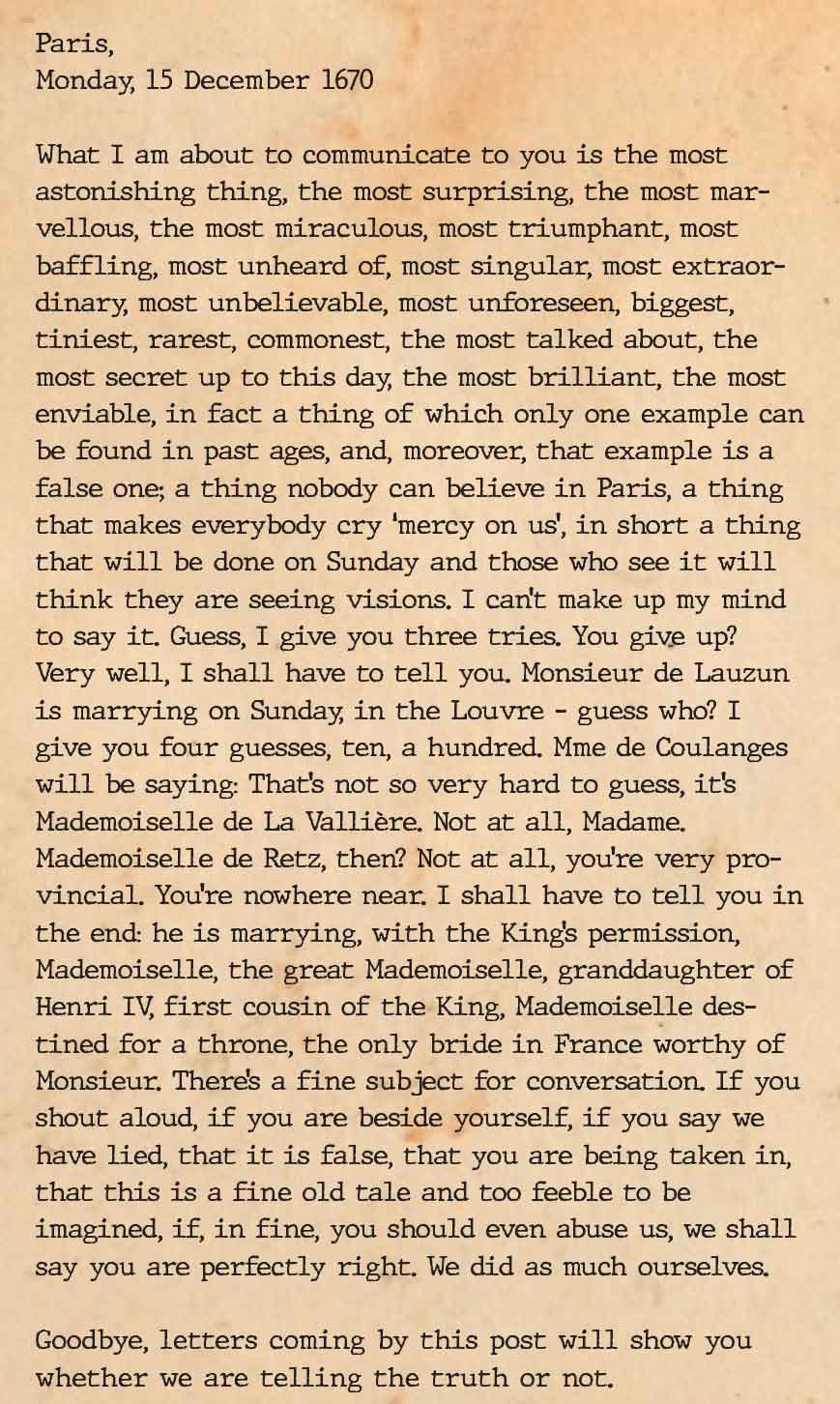 Believe It Excerpts of a letter from Madame de Sévigné, a French aristocrat, to her cousin about the impending wedding of Anne Marie, the granddaughter of Henry IV, to a man lower in stature. The wedding, however, was called off after she sent the letter.